location: Helena, Montana
total mileage: 618.4 miles (including 31.5 off-route)
average daily mileage (including rest "zero" days): 26
# of continental divide crossings: 4
# of cow pies/splatters in the road: 1,548 (approximately)
favorite trail foods: mac 'n' cheese, kit kats, and cola bottle gummies!!
these adventurous sorts of journeys are packed full of learning. bear with me as i share a few of the morsels of wisdom so far:

- a bandana, which quadruples as a washcloth, towel, sun protector, and breathing mask, effectively quintuples as a water filter.
- , through which we rode, was the home of The Unabomber.
- i don't like spiders, but gigantic daddy long legs that invade my tent make me really freak out.
- lightening my pack is a good idea.
- forget carrying the weight of a fleece top - i'd rather carry a fly swatter!! we have been bombarded nonstop with some combination of mosquitoes bees, and flies (my ankles are swollen from bites... which might actually make them proportional to my body for the first time). you know it's bad when a regular lunchtime game involves creating piles of dead flies.
- don't leave your extra biking shorts, socks, and bandana "drying" in a tree as you ride a ways down the road.
- the people who live in and visit the town of Ovando are really nice... except for that one lady complaining about gas prices.
- hummingbirds are eerily attracted to me, scaring me by hovering and staring less than two feet away on multiple occasions. (could it be my pink tank top? or simply another reason i should carry a fly swatter?)

our last shenanigans in Whitefish involved unicycling, naturally. fellow mountain unicyclist carl kohnstamm, whose family so graciously hosted us, fed us, and cleaned our rank clothes, got out his giraffe unicycle and we had a go at it. then, being the circus that we are, we rode to the local ice cream shop for some evening sweetness. 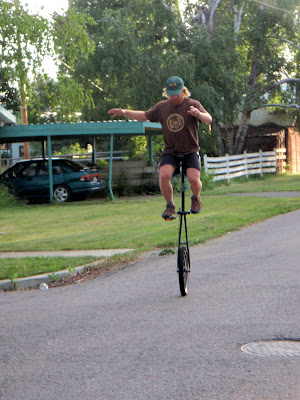 [matt on the giraffe]

[first time ever attempting to idle on a giraffe!]
early the next morning, we rode out of Whitefish, refreshed by how the kohnstamms spoiled us. 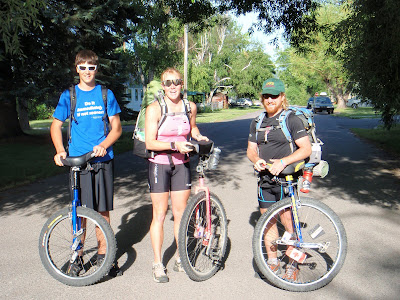 [carl, me, and matt
carl was an absolute champ keeping up on his 24" wheel!] 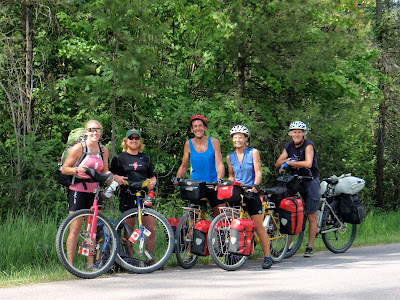 [met up with the charming "posse" of great divide riders coming out of whitefish - wish we could have kept pace with this great bunch!] 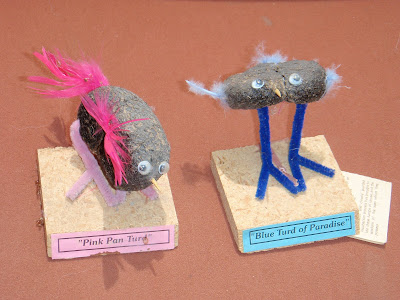 [never underestimate the power of poop.
"pink pan turd" and "blue turd of paradise" were discovered at a yard sale; sadly, they were too delicate to be purchased, carried, and sent to friends at the next post office.]

lazy days can materialize into some amazing experiences. after a big meal upon reaching civilization (finally), the last thing we want to do is get back on our unicycles for some good ole bumpy riding. thankfully, in Big Fork, MT, our procrastination led us to discover amy and anya, who were in the last days of their Eugene-to-Glacier bike tour. holler to some awesome campsite buddies! Big Fork happens to be adjacent to the largest freshwater lake west of the Mississippi: Flathead Lake. 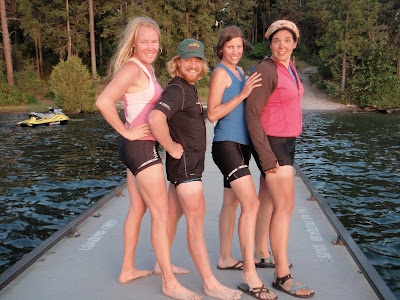 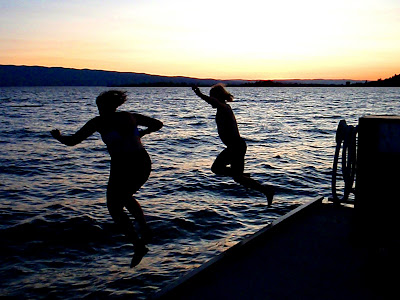 [anya and matt jumping into Flathead Lake at sunset]

the route is very well described on our maps, and i have done fine without a cyclometer. however, there have been times that we have gotten lucky. after a disagreement about which way to go, matt spotted this sign off the road in the foliage. 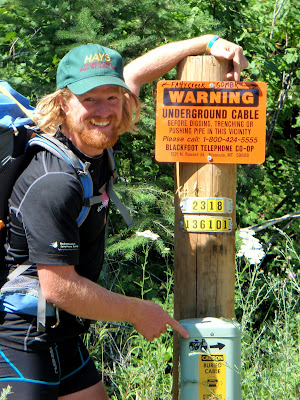 [what does this have to do with the great divide mountain bike route?
look closely....]

so, to clarify the nature of the route: we ride mostly on dirt roads, some atv/4wd tracks, and some single track; 90% of the route is off-pavement, while the other 10% makes up the time we ride through towns, etc. singletrack (as seen below) is challenging, and most often quite technical. while it can be the most fun, the stipulations for such enjoyment usually entail not going steeply uphill. here, we encounter some fun singletrack as the sun sets upon a meadow. 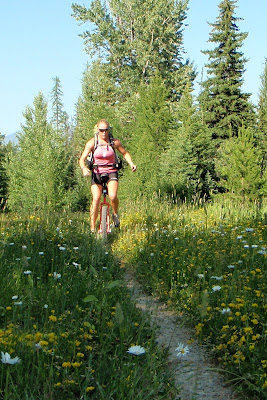 i think i've mentioned the sunsets at least twice in this post already. they are such a treat, and make riding in the evenings so magical! 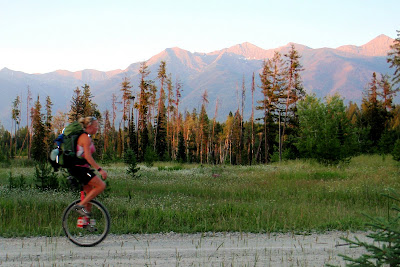 [in the swan valley, with the swan mountains in the background]

however, the scenery doesn't always need a sunset to take my breath away. here is an example of a basin up which we rode. 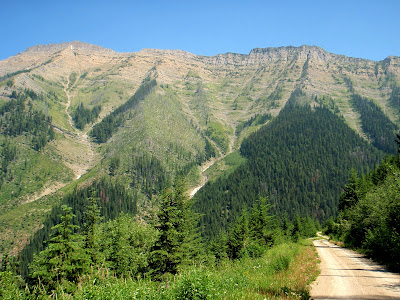 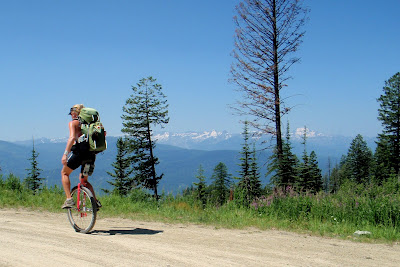 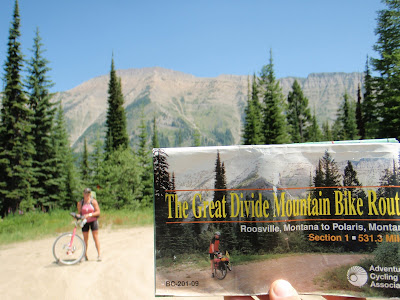 [we pretty much feel like we have succeeded in life by recognizing the backdrop to the "section 1" map for the great divide route.
good eye, matt.]

as aforementioned, when singletrack trail goes steeply uphill, is smothered with rocks and bumps, and we can't exactly bunnyhop over them well with 25-pound packs, it gets pretty miserable, due to a lack of any sort of momentum; we can't exactly "gear down." this particular day marked the first time i have had to walk any section of the route since way back in . at first it was a confidence crusher, but after mounting the steed once more, it remained solely a pride-crusher, which is probably for the best. at least the scenery rewarded us as we worked hard up this climb.

anyone who has spent a few days with me knows the importance of frequent snacks to my overall happiness and outlook on life (it's extreme, dramatic, and very inconvenient). my parents have seen me go from composed to sobbing in a matter of seconds, remedied immediately by a few bites of food. combine this factor with a few hard spills and you have one sad gracie. i was overdue for lunch when i took this hard fall; you can't seem them in the picture, but tears are streaming out of my eyes. 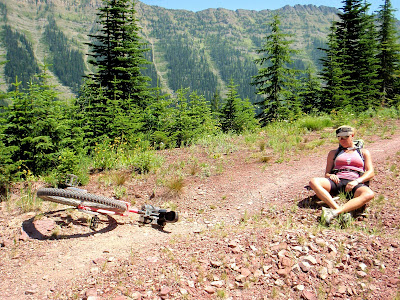 i have had a few very hard falls this trip: several bruises, cuts, and dirt-smotherings. the falls are made significantly worse by the backpack, frequently making it impossible to stick an unplanned dismount (too-well-known to unicyclists as "UPDs"); the weight makes me so top-heavy that i have face-planted several times. for example, on the second day of the journey, i landed sprawled out, with my teeth on some rocks (but nothing a few cola bottle gummies can't wash down).

[have i mentioned the joys of downhill singletrack?! :-)]

[oh yeah, and the joys of singletrack where you can't see the trail, and you still have to negotiate bumps and rocks?
this section was actually a real treat and a highlight of the trip so far, with the best scenery to boot.] 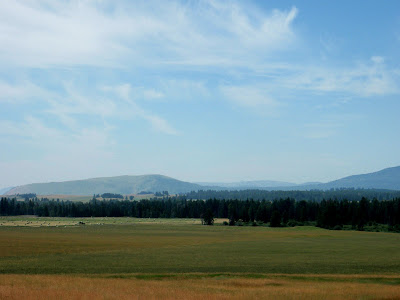 [out of the jagged basins, into cattle country.] 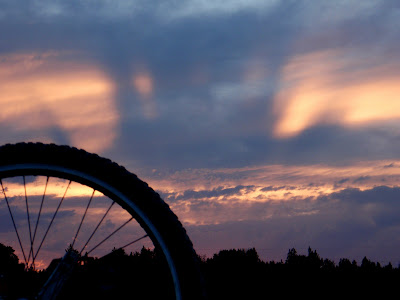 yeah, there go those sunsets again. i am so in love with them. the above picture portrays the light shining through stormclouds. in stopping to photograph the sky, we decided on a whim to stay in a nearby hay barn. however, this was no ordinary hay barn. this was the real deal: stacked high, and with a solid roof. 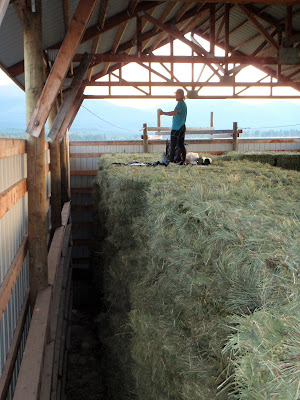 with our luck, the roof proved most useful this particular night. it wasn't long after climbing atop the stacks that lightning started sparking over a nearby ridge. just after we dozed off, the rain came fast and hard, hitting the metal roof with such power that matt and i couldn't hear each other talk from our sleeping bags 5 feet apart. lightning and thunder ignited the sky in literally every direction; it was a storm like i had never experienced, and i woke up with dry gear in the morning. being dry is not overrated in the wilderness.
we salute you, diligent ranchers. 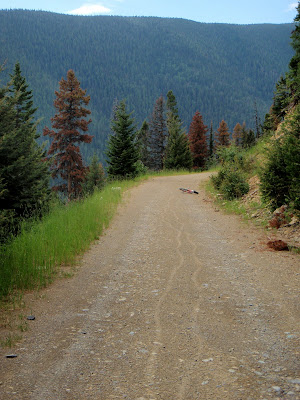 [how to track a unicycle in the woods.]

just when i was wondering when the real challenge would begin, yesterday brought us multiple continental divide crossings, complete with virtually impossible terrain. i am frustrated by the inability to portray steepness in still photos, but this will have to do. oh, and for all you bicyclists out there, banked trails are "hell on wheel" (no handlebars). 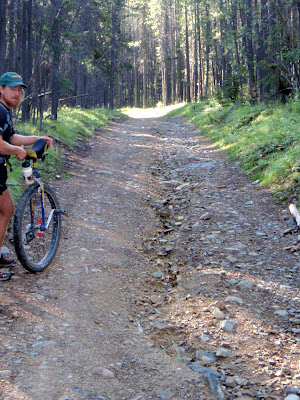 the first crossing of the day, although comprised of the toughest terrain we have encountered thus far, had some very fun sections that involved getting wet and muddy - yes! and, we were able to ride up more of the ascent than i initially thought possible. 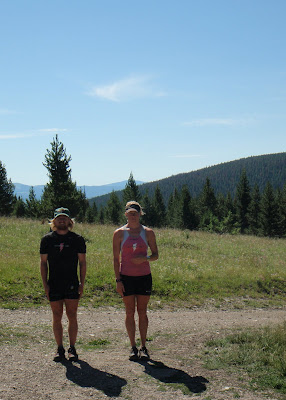 [continental divide crossing #2 for the trip: we are making a "2" in roman numerals] 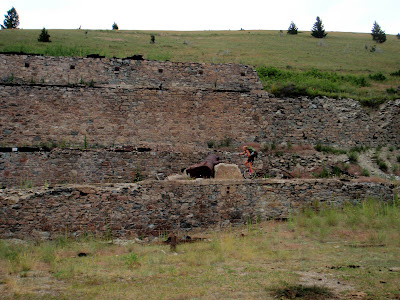 [why wouldn't we try riding along a ridge in old mine ruins? (look closely)]

no rest for the weary: right after the crossing, we headed up yet another divide crossing, but not before a thunder & hail storm caught up to us.

and, finally, to our 3rd continental divide crossing of the trip: 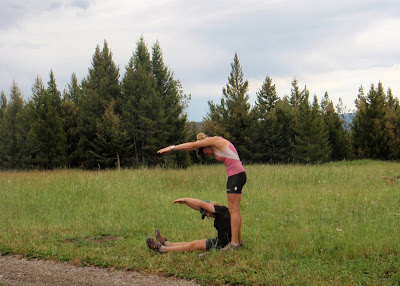 we had hoped to cross three divide passes in one day, but various rest stops got the best of us... or shall i say that we got the best of them? really, the evening kept getting better. despite dodging a seemingly infinite number of cow pies and foot-deep ruts in the road, intimidatingly shooing herds of cows off the roads (including an undaunted bull), we enjoyed the ride through a ranching valley. when we were both thirsty and out of water, with no creek in sight, matt spotted a freshwater spring emitting water into a spring box, harnessing its liquid delight, seemingly just for weary travelers like ourselves. there's something about not having to treat water in cattle country that makes me feel like i've beat the system. yee-haw!

not far past the spring, we stopped to camp for the night a little ways up on a private road. this worked out well, but served as a catalyst for some morning excitement: within seconds of packing up, a truck began to drive up the road. we were able to scoot down a hillside and hop two fences and two railroad tracks before it passed, safely arriving "in the clear." unfortunately, matt's attempt to cross a little stream left him with one shoe - the other had been sucked into the mud! this was not so much a "welcome" interruption to the morning, since it was one of our coldest so far. hakuna matata, the shoe was safely retrieved and functioned beyond our fourth divide crossing, into . 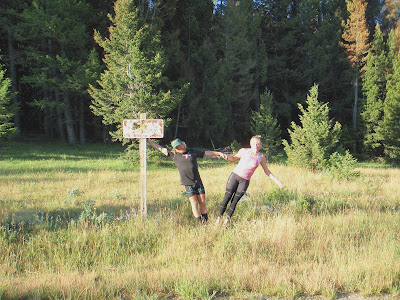 well, folks, congrats on making it through the entire novel of a post! greetings from , where the first things i noticed on the ride into town were sidewalk curbs. imagine that: curbs! - what a novel concept, and seemingly foreign these days.

Only Eagle Eye Matthew would see the fresh-water spring. And the sign. And the exact scene in the brochure. Has he found any wigs yet? ;)

Loved the haybarn episode. I wish I'd been there!!! There's nothing like being dry under a metal roof in a storm! It's magic.

Cheering for you both.
Love.

Yeah, what Mom said. And thanks for the voicemail! Keep on rollin'.

Awesome job guys! I have family a sliver east of where you're at and I'm always surprised by the extreme winds that comb the foothills there. Have you had much trouble with said wind? Take care.

I love these posts and have a million questions, of course. I watch and look over and over. Hang in there and keep each other safe and happy. Love to you both.

You guys are simply amazing! I can't get over how epic the trip has been so far and how well you're sharing it. I'm sure there is so much more, but thanks for the glimpse :)

Love the scenery, it's spectacular! Thanks for taking the time to post ..
Stay safe...

Hi Guys! From the satellite, we think you are near Idaho Falls--your closest point to us. We can't raise you, but if you need anything, we will bring it to you!
MAMA #2