Greetings from Frisco, Colorado! The past week has taken us from a treeless, deserted expanse, into a lush, grand landscape. I am grateful for more frequent water availability, though I still battle perpetual dehydration.

Local passers-by have taken the time to warn us of things like bears and fast drivers (though neither want to hurt us), but the warning that takes the cake began like this: "You two know what you have to look forward to?" Wait, let me guess.... a hill? A steep hill? A hill that is so steep that even though I've pedaled here from Canada, I should probably just stop and go home? On my coast-to-coast journey in 2006, even the people in Kansas cautioned me against the treacherous local incline. Perhaps there is an amount of pride found in one's local terrain, or maybe these people just really like to be discouraging - I haven't yet figured out the intent of such warnings and cautionary statements. I try hard to give them the benefit of the doubt by assuming they're trying to help, but there is nothing helpful about it. Feel free to enlighten me with a reasonable explanation.

In other news, did you know that Specialized perforates their tubes? Yes, I had a hole in my tube, but not from a puncture. In fact, there were mechanically created slits around the circumference of a tube cross-section. Again, if there is a reason for such a cruel joke, feel free to enlighten me with a reasonable explanation. 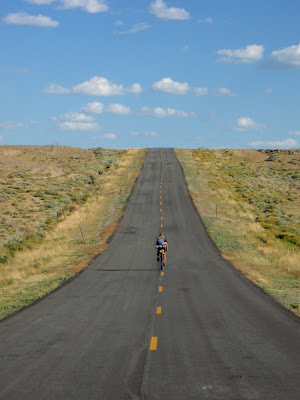 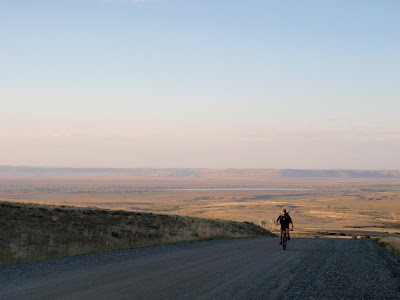 [Matt, climbing up Middlewood Hill out of Rawlins] 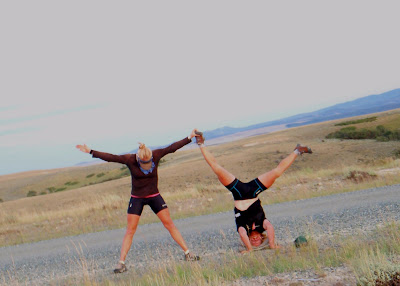 Aspen trees are my favorite. Thankfully, Colorado is full of them, and it makes rolling south that much more appealing - some are even starting to change color! The flutter of the leaves often sounds like the rushing of a nearby creek, both of which are sounds that I have become accustomed to hearing more frequently than car engines - not a bad thing. 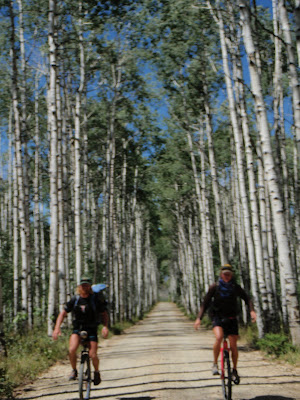 
Good fortune has followed us, showing up mostly in the people along the way who have inconvenienced themselves just to spoil us. Among them is Jon Wade, who gave us a complimentary hotel room in Steamboat Springs, just as darkness and hopes for a place to stay descended. Colorado has brought hard-packed (read: easy-to-ride) roads, beautiful vistas, unique wildlife sightings (porcupine and beaver), and even more appetite. Since entering the state, which had no welcome sign (alas, what is a blogger to do?), we have seen less of the "high grade" or "well maintained roads," which make us cringe knowing that it means probable washboard, gravel, and motorized traffic. However, we have enjoyed more hard-packed dirt, often coming in the form of "lower grade" or "primitive" roads: worse for cars, but great for unicycles!

I have been asked why I cry so frequently on this trip; and, because the high percentage of riding days that bring me to tears also happens to amuse me, I will address the issue. Really, what could be so bad? Well, below is a list of things that make me cry - hopefully this illuminates the reality of day-to-day life on the Divide By One journey.
(1) bad dreams
(2) low blood sugar level
(3) pain
(4) exhaustion
(5) other frustrations with particular situations
(6) laughter
Furthermore, the combination of any items #1-5 can create additional distress, whereas a high blood sugar level combined with item #6 can bring an exorbitant amount of tears as well. Not to make it sound confusing or anything.
Regarding #1: the other morning, I slept restlessly all night, in and out of a dream that I had been diagnosed with an acute, terminal cancer, and that I had only a few days to live.
Regarding #2: I am much better at eating enough on this trip than on my coast-to-coast trip, so it is rarely an issue.
Regarding #3: from the moment I get on the seat in the morning, I am in pain, often wincing with the excruciating feeling caused by my many, irritated saddle sores. The pain remains to some degree until we are finished riding for the day, 8-12 hours later (6 mph is a painful pace!).
Regarding #4: I have been sleep-deprived for nearly 2 months. Without sufficient sleep, life as we know it might end, and slight difficulties become depressing disasters. Each morning I awake ready to go to sleep all over again. It is an increasingly exhausting cycle, and I hope I find a way to cope for the rest of the journey.
Regarding #6: laugh attacks happen. Sometimes I have to get off my unicycle because I can't stay balanced while laughing so hard. 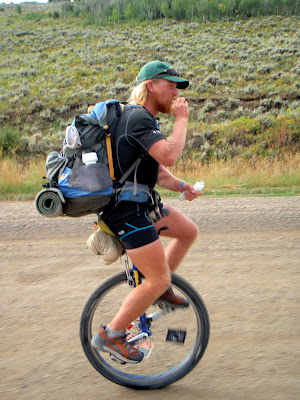 [Matt claims that tooth brushing is more fun at 6 mph.]

In 2006, I met Arnie and Shelly Henden of Frisco, Colorado, when I rode through on a unicycle with my dad on a bike. Arnie offered their hospitality and we have kept in touch since. They are an amazing couple, active in the outdoors and in their community. Arnie braved a very wet storm on his bicycle to find us on Highway 9 and provided a personal escort to their home in Frisco, where we are recovering for the day. The below picture shows Arnie's mad skills on a unicycle in front of Dillon Reservoir, at the location where I left my camera behind on my coast-to-coast trip (later to be recovered by their efforts). This time around, I decided to take my camera with me instead of leaving it on a bench. What a novel concept. 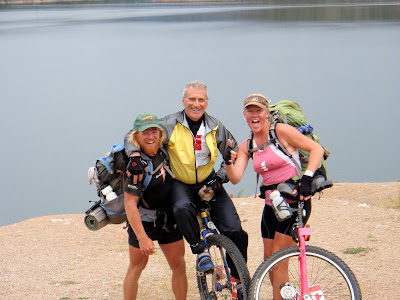 [Arnie's a natural.]
After a shower and some well needed down-time, the party commenced, with a bunch of their friends coming over to celebrate - because life's a party (right, Fred?). :-) The crew was a blast, and it was great to re-meet a handful of folks that I had met in 2006. 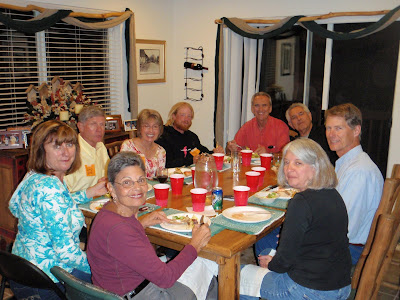 [Party animals.]
So freakin' excited to be here! The last couple of weeks have been relentless and have really worn me down. Receiving the Hendens' kindness is more than we could ever ask for. I am so sick of being in the sun (my mood drops significantly every morning when it comes up), as its presence has equated itself with discomfort. Saddle sores hound my every pedal stroke, exacerbated during each mount and dismount. Sleep deprivation makes everything that much worse. But lest my complaints continue, now it's time for some catch-up! Off to do errands, meet up with friends in the area, and who knows - maybe another dinner party tonight? Why not? :-)
Rock n roll!
Yours truly,
Team Blazing Saddle Sores
Posted by Gracie Cole at 8:36 AM

Hope you got my e-mail and can connect with Vacek's brother-in-law! More hospitality sounds like just what the doctor ordered.

I can't imagine how tough the day-to-day elements of this are, but I hope amidst the pain, tears, laughter, saddle sores, pain, you can also remind yourself occassionaly that you are on the most EPIC unicycle trip of all time. With all due respect to the first Balance Award winners, you have taken the concept to a whole new level, and one not likely to be repeated for some time. Only Mike's Haul Road and Steve's Everest journeys even come close.

How did you manage to take the picture in Aspen Alley? The 10-second delay and some frantic scrambling? That would be really impressive.

Awesome Job guys! It was great to meet you in Steamboat by chance and make a small difference in your trip. Let me know if you ever get back to Steamboat.

We are now back among civilized people, in the land of showers and beds and cars and real food (!!!) and we are glad to see you are also still in the land of the living. We, too, LOVED the aspen. Have you gotten to see pikas? My personal favorite critters, along with obese marmots. We look forward to seeing you soon!
love !!!
Mommy
p.s. Daddy shaved off his month-long whiskers at Luke's request this morning.